What Is Tallow? Health Benefits, Unexpected Uses and How to Make Your Own at Home 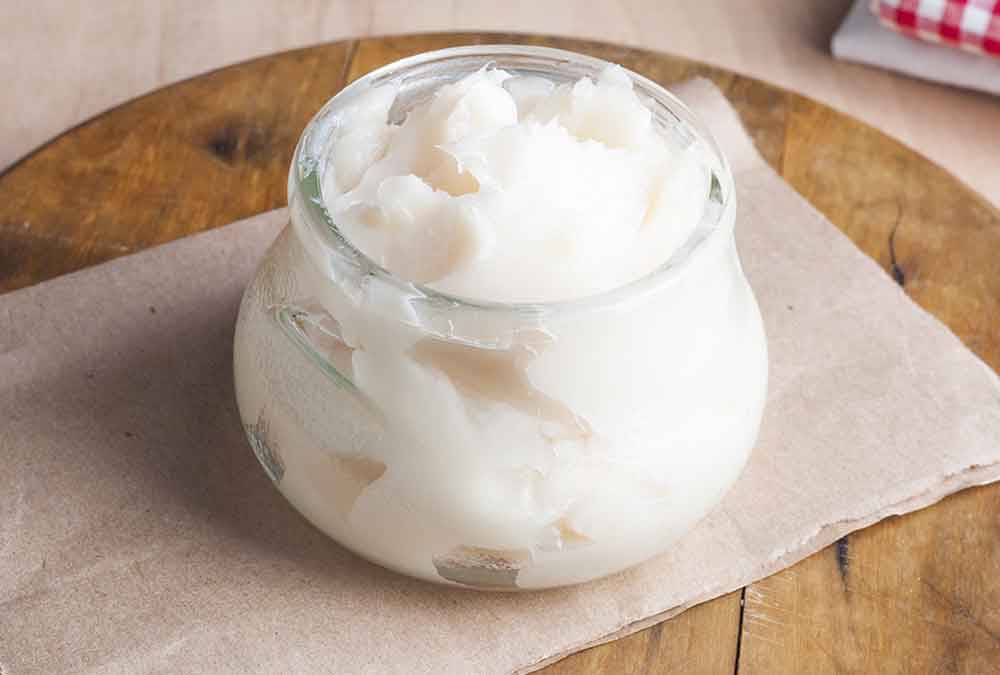 Tallow has been around for centuries. While it fell out of favor during the low-fat mania of the 1990s, it’s experiencing a resurgence in popularity thanks to our improved understanding of the importance of fat for numerous health goals, including radiant skin, cancer prevention, and, yes, weight loss. Tallow has become something of a trending topic in the paleo and primal eating communities. So, especially if you’re following a high-fat, low-carb diet like keto, you might be curious: what is tallow, exactly?

In the simplest of terms, tallow is purified beef fat (or, less commonly, mutton fat). To make tallow, first collect suet, a hard, nutrient-dense fat that surrounds the kidneys and loins, then render it (melt it down), skim off the impurities, and voilá, you have tallow.

Tallow’s best-known role is as a high-quality cooking fat. In fact, if you ate McDonald’s french fries prior to 1990, you’ve tried beef tallow—that’s what they used to cook them in!

Fat-seeking consumers are turning back to tallow for their cooking needs, thanks in part to its high smoke point, which allows it to be heated to a high temperature without oxidizing and creating harmful free radicals.

Is Tallow Good for You?

Is tallow good for you? Hell yes! But a lot of people used to believe otherwise. Some probably still do. Not that long ago, the common consensus—even among doctors and nutrition professionals—was that fat was bad for you.

How Tallow Got a Bad Reputation

NPR correspondent Allison Aubrey traces this fear of fat to a hearing called by Senator George McGovern in July of 1976. The outcome of that hearing? The first set of government-approved dietary guidelines, which encouraged citizens to cut down their fat consumption and up their carbohydrate intake.

This sounds backwards now, but at the time, many scientists believed there was a link between fat consumption and heart disease, a rising health concern of the era. And the carbs the guidelines promoted were vegetables, fruits, and whole grains. But inevitably, it all got oversimplified.

The food industry began creating fat-free versions of familiar foods. To ensure they still tasted good without the fat, they ramped up the sugar content. As people filled up on refined grains and sugar, diabetes and obesity rates soared. The attempt to curb heart disease had spawned new health problems.

To make it worse, experts who looked back at the results of those who followed low-fat diets say there’s no evidence cutting out fat lowers your risk of disease. An excellent review of available data published in The Lancet in 2018 not only found no association between a low-fat diet and a lowered risk of heart disease and that a high-fat diet led to adverse health outcomes, but it also found that a high-fat diet can lead to a decrease in major cardiovascular events.

The Health Benefits of Tallow

Tallow has a highly desirable fat ratio for a cooking oil:

Tallow is also a rich source of conjugated linoleic acid, or CLA, which studies indicate can improve your health in a number of ways. A meta-analysis of human studies published in The American Journal of Clinical Nutrition found that CLA can spur weight loss. Significantly, the studies relied on CLA supplements, which other research has shown to be less effective than CLA taken in directly from food sources.

Animal studies have shown that while all forms of CLA have “undeniable efficacy as an antitumorigenic food component,” meaning they help fight cancer, the CLA found in beef tallow is especially effective.

Large population-based observational studies have shown that people who frequently consume foods rich in CLA have a decreased chance of developing diseases such as type 2 diabetes, breast cancer, and prostate cancer. It also appears that CLA from cows who graze on grass is the healthiest of all, particularly when it comes to protecting against heart disease.

Tallow also helps your body absorb fat-soluble vitamins A, D,E, and K, all of which keep your immune system running at maximum capacity. It also contains a number of essential vitamins, namely:

Tallow is quite a versatile substance that has been put to a number of uses for centuries. It’s one of the central ingredients in a traditional, high-energy food made by different Native American tribes. It has also been used, and is sometimes still used, in high-end leather conditioners and shaving soaps. The ancient Romans made wicked candles from tallow, and up until the 1950s, it was the top choice for lubricating locomotive and steamship engines. Tallow is also a long-standing folk remedy for inflammatory rashes, chafing, and other skin irritations. Here are four of the top uses for tallow today.

Rendered animal fats, like tallow, lard, and ghee, are popular among paleo cooks because they’re heat stable and have high smoke points. While all three share certain traits, and many stock all three in their kitchens, tallow’s versatility and proven health benefits make a compelling argument for why you should make it your top pick.

Tallow has a smoke point of 420°F, making it one of the most heat-resistant cooking fats out there. To give some context for that, coconut oil has a smoke point of 350°F. As touched on earlier, oils with high smoke points are less likely to oxidize and send dangerous, disease-promoting free radicals flooding through your body.

Tallow is also highly resistant to rancidity, meaning you can use it again and again! Simply filter the fat left in the bottom of the pan back into its container and store it away. If you’re trying to eat healthy on a tight budget, you’ll really appreciate the savings this strategy can yield.

Many cooks also find tallow imparts a truly delicious flavor to the foods cooked in it, especially steak. And those interested in sustainability appreciate that cooking with tallow utilizes a nutrient-dense ingredient that might otherwise be discarded during the butchering process.

If you want to see for yourself why there’s so much buzz behind cooking with tallow, try this recipe for fried green tomatoes (it’s gluten-free!).

While buttering up your body with beef fat may initially sound like the start of some kind of comedy sketch, there’s good reasons why tallow has been used a natural skin remedy for ages. Our cell membranes are composed of approximately 50% saturated fats—almost identical to the saturated fat composition of tallow. That makes our skin cells super receptive to absorbing the fatty acids found in tallow, which are the building blocks for healthy skin and vital for the process of regeneration and repair.

Not only is tallow completely non-toxic, it’s also full of health-promoting compounds, so by using it as body butter, you can access some of the same benefits as when you eat it.

Tallow can be made into nourishing lotion bars or balms, but this whipped body butter just might be our favorite skin care use for tallow. It just looks delicious! And if you’re worried about smelling like, well, tallow, you can add in the essential oil of your choice—this recipe recommends peppermint, patchouli, or grapefruit.

Watch Hailey from Health Starts in the Kitchen whip up a batch of body butter (full recipe here).

Tallow just might be the ultimate fat to use for soap making. Not only does it have fantastic skin-nourishing properties, as discussed above, but it also hardens and lathers well. In fact, many soaps you buy are made with tallow!

The first references to tallow in soap date back to Greek mythology when soap was accidentally formed from ash and fat. Artisan soap makers find tallow to be especially conducive techniques, such as suspending elements within a soap, adding color with dye, or piping decorative elements. Tallow soaps are known to be long-lasting and creamy in texture with a pleasant lather.

Begin your journey into the art of soap making with this simple recipe for soothing Calendula Tallow Soap.

We know candles have been made from tallow since the era of the Roman Empire, and possibly even earlier. You can easily make your own by simply melting tallow, pouring it into a jar, dropping a wick down the middle while it’s still liquid, then letting it cool. Candle making truly does not get any easier!

Tallow is also more affordable than beeswax, so some candle-making enthusiasts will pair the two to keep costs low.

For a fascinating and thoroughly modern twist on tallow candles, why not take some inspiration from the Denver restaurants creating edible versions? Two eateries have started offering tallow candles infused with seasonings like rosemary and garlic that melt down into delectable pools just begging you to dip bread into them. Just make sure not to eat the wick! 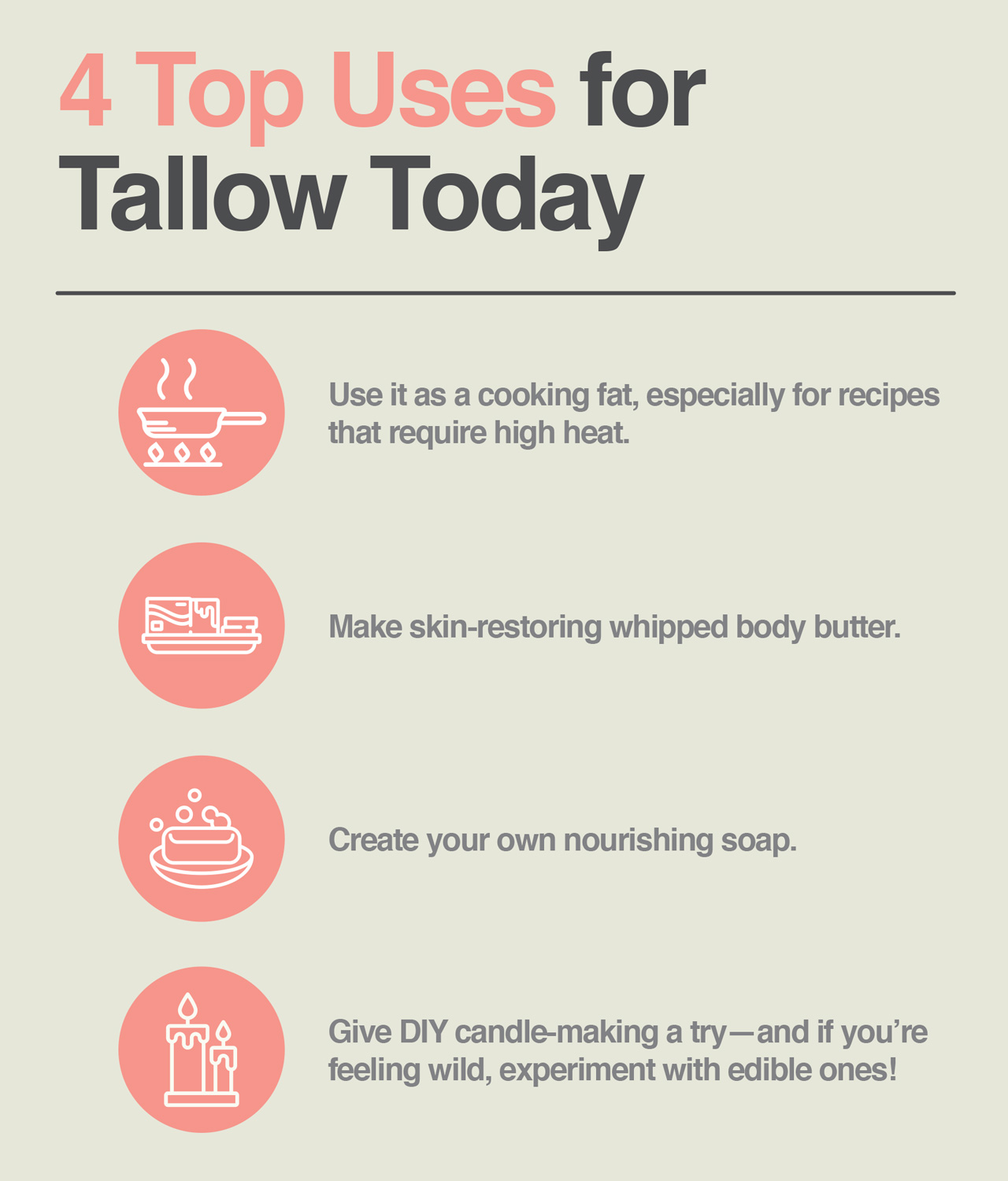 How To Make Tallow

While it can practically pay for itself in the long run since you can reuse it for quite some time, the initial cost for store bought tallow can be on the expensive end. Fortunately, making your own tallow at home is a super-affordable option and far less labor-intensive than you might think.

The technical name for the tallow-making process—taking raw fat and melting it down—is rendering. There are two basic methods you can use, dry rendering and wet rendering. For a dry render, the fat pieces are left to melt by themselves until liquified. A wet render involves a few more steps: first, the fat pieces are covered with water, then they’re boiled until the liquid fat has been extracted, then the fat is strained out.

Dry rendering is clearly the simplest approach, but it does take a longer time to cook the fat that way. Wet rendering also makes it less likely that the fat will burn, and some also hold that wet rendering yields a milder-tasting tallow.

After you’ve decided between wet rendering or dry rendering, you’ll also have to choose how you’re going to melt down the fat. Some popular ways include using a slow cooker, an oven, or a stovetop. 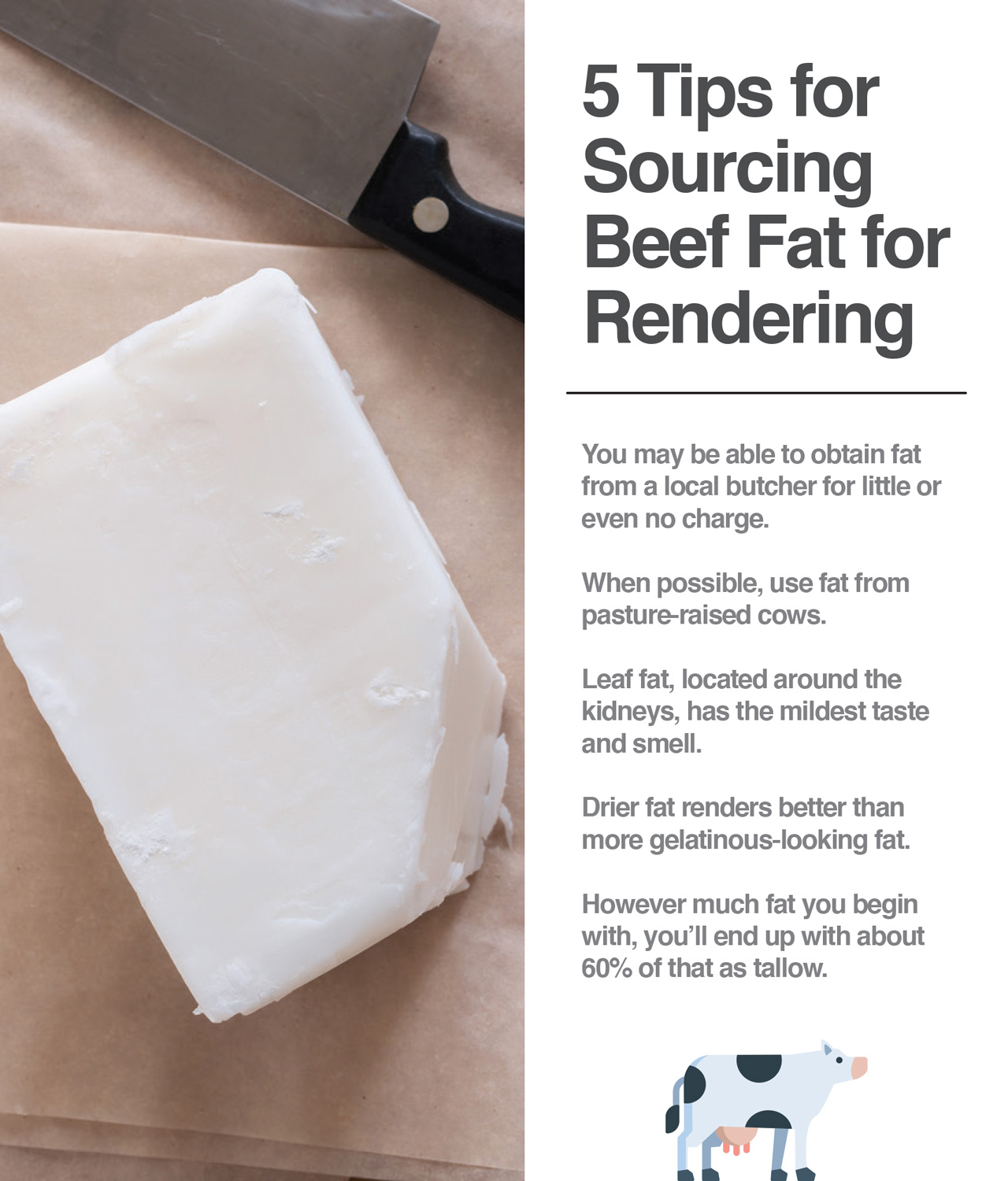 At this point, you can strain the tallow in the same way described above, making sure to remove the shriveled bits of fat before storing. These are called cracklings and can be toasted in the oven and eaten!

You can also let the pot and its contents cool to room temperature, scoop the cracklings out, then place the pot in the fridge overnight. By morning, you should be able to separate the tallow from any remaining water.

Tallow can be stored in an airtight container at room temperature for over a year! If you’re not sure how often you’ll use it, you may want to store it in your fridge or even deep freeze it to preserve its full nutrient benefits. 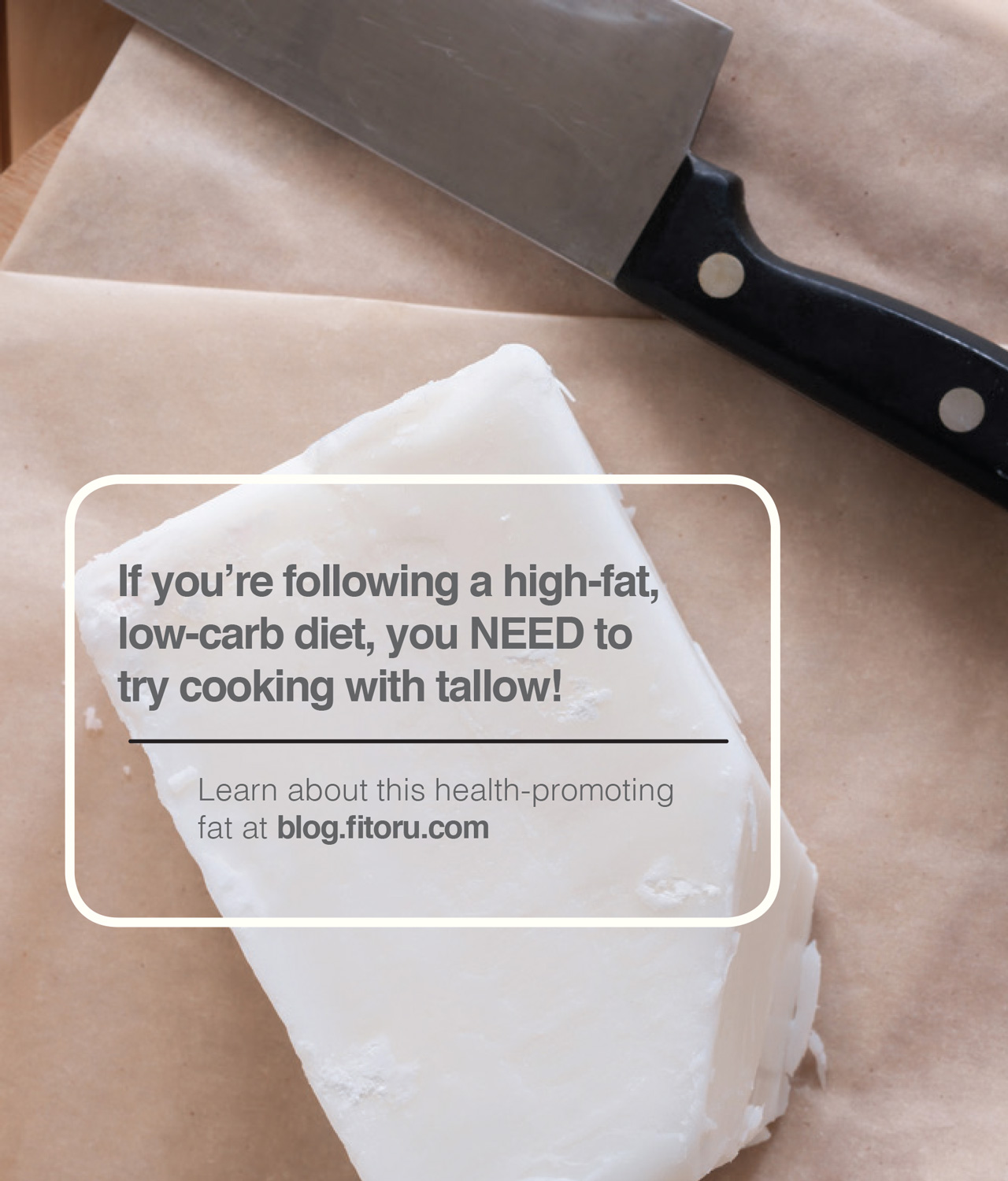 The Best Time of Day to Use MCT Oil 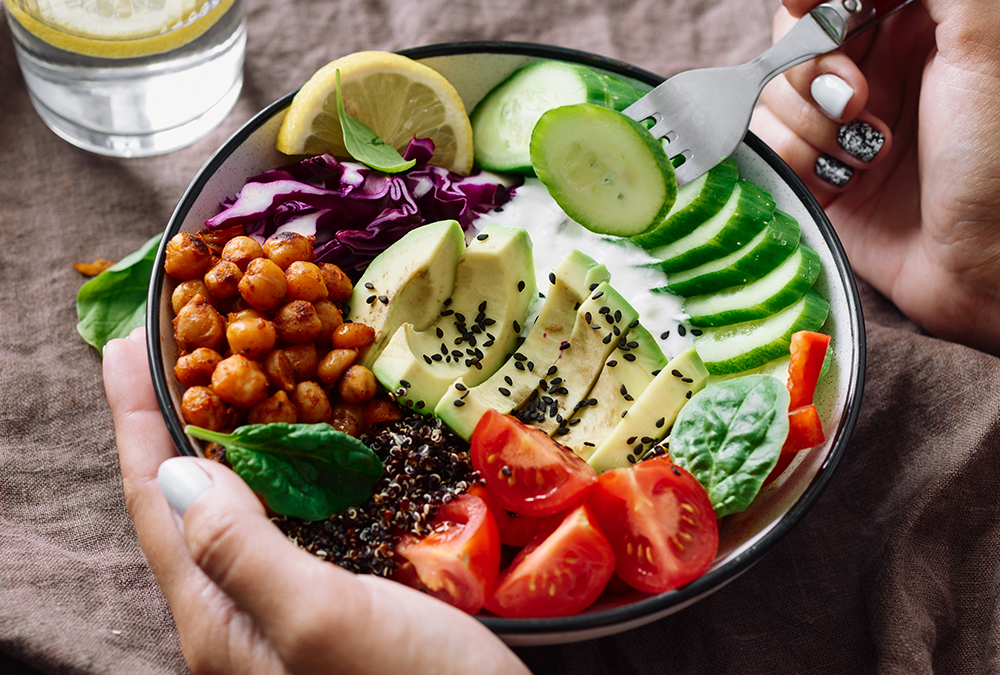 There are so many different diet plans and weight-loss programs out t... 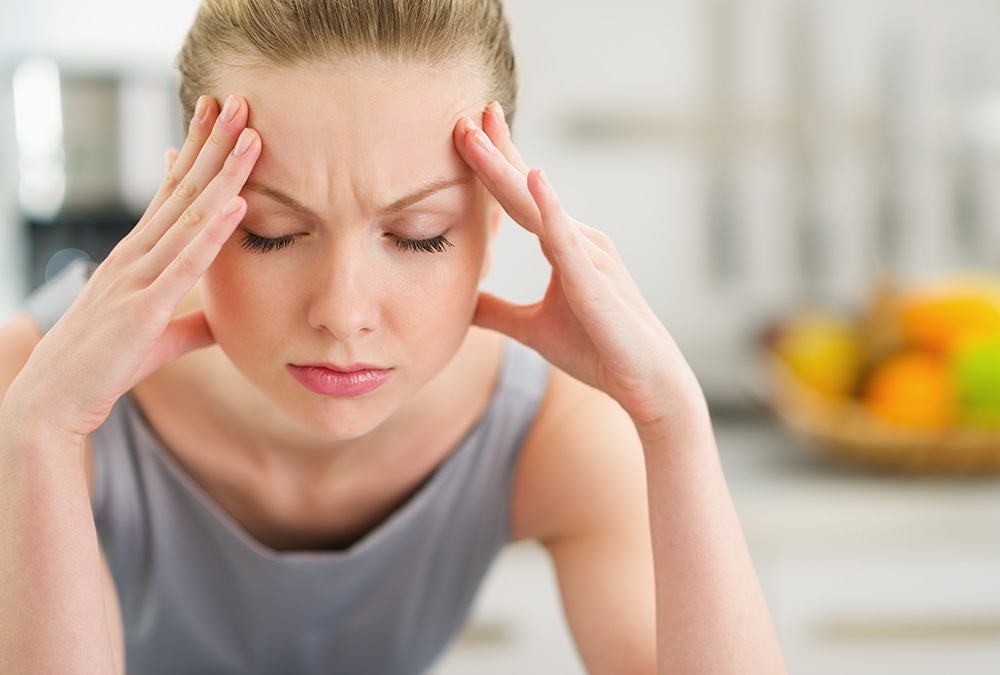 Ketoacidosis vs. Ketosis: The Difference Between a...

Though their names are similar, ketoacidosis and ketosis are complete... 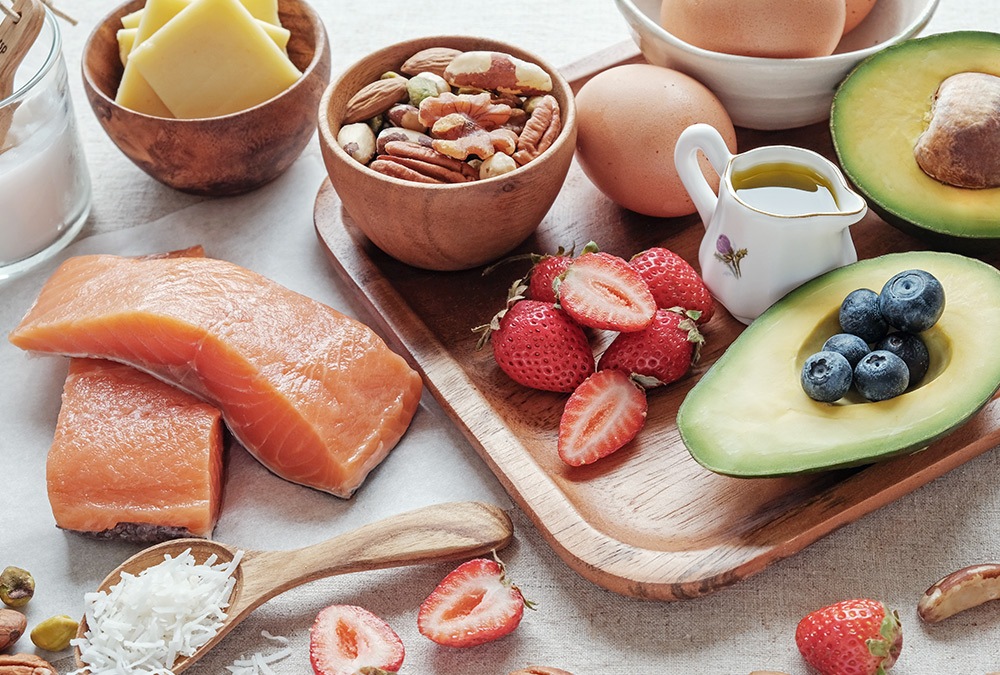 How to Use a Keto Macro Calculator to Determine Yo...

Depending on how you feel about math, one of the worst parts about the...