Pain Between Shoulder Blades: What Could It Mean? 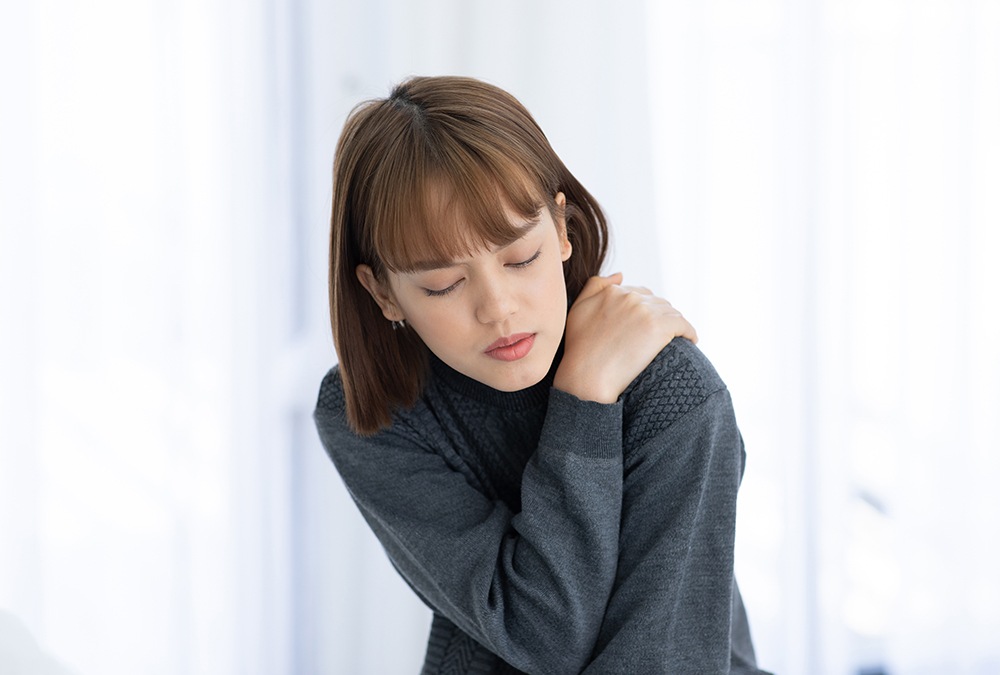 Neck and back pain can be some of the most worrying and debilitating pain people experience, and some experience it all too regularly, whether it’s from sleeping in the wrong position, having poor posture at their work desk, or getting one accidental twinge while moving or lifting something. And the pain can persist for weeks. Pain between shoulder blades, which is interscapular pain, is in some ways the worst of both worlds between back pain and neck pain. Upper back pain can be most concerning because there isn’t always an obvious cause. Lower back pain is the type of pain people often know came from a bad lift or twist, but pain in the middle back or between your shoulders: where did it come from, and what could it mean for your health? This article discusses the symptoms, possible causes, and potential dangerous outcomes that can result from interscapular pain.

To pinpoint the exact location of the body we’re talking about, let’s start with a brief overview. The shoulder blades, medically described as the scapulae, are triangular-shaped bones that stick out from your upper back and become more visible when you move your elbows towards your back. Among the many functions of the shoulders blades is to support pivotal movements made by the shoulder.

Pain that is felt between the shoulder blades could have to do with any one of these vital structures, or might be originating from another part of the body entirely, and only manifesting in this area due to how pain signals travel through the nerves.

There are many possible causes of pain between the shoulder blades, and some of them can be quite serious. Conditions affecting the structures in this region of the body may need immediate medical consultation, but the pain you feel could be a case of what’s called “referred pain,” namely pain that is felt between your shoulder blades but originates from somewhere else.

What follows are potential causes, and if you are at all concerned about a sudden, severe, or persistent pain in this area of the body, we urge you to seek immediate advice from a trusted medical professional. 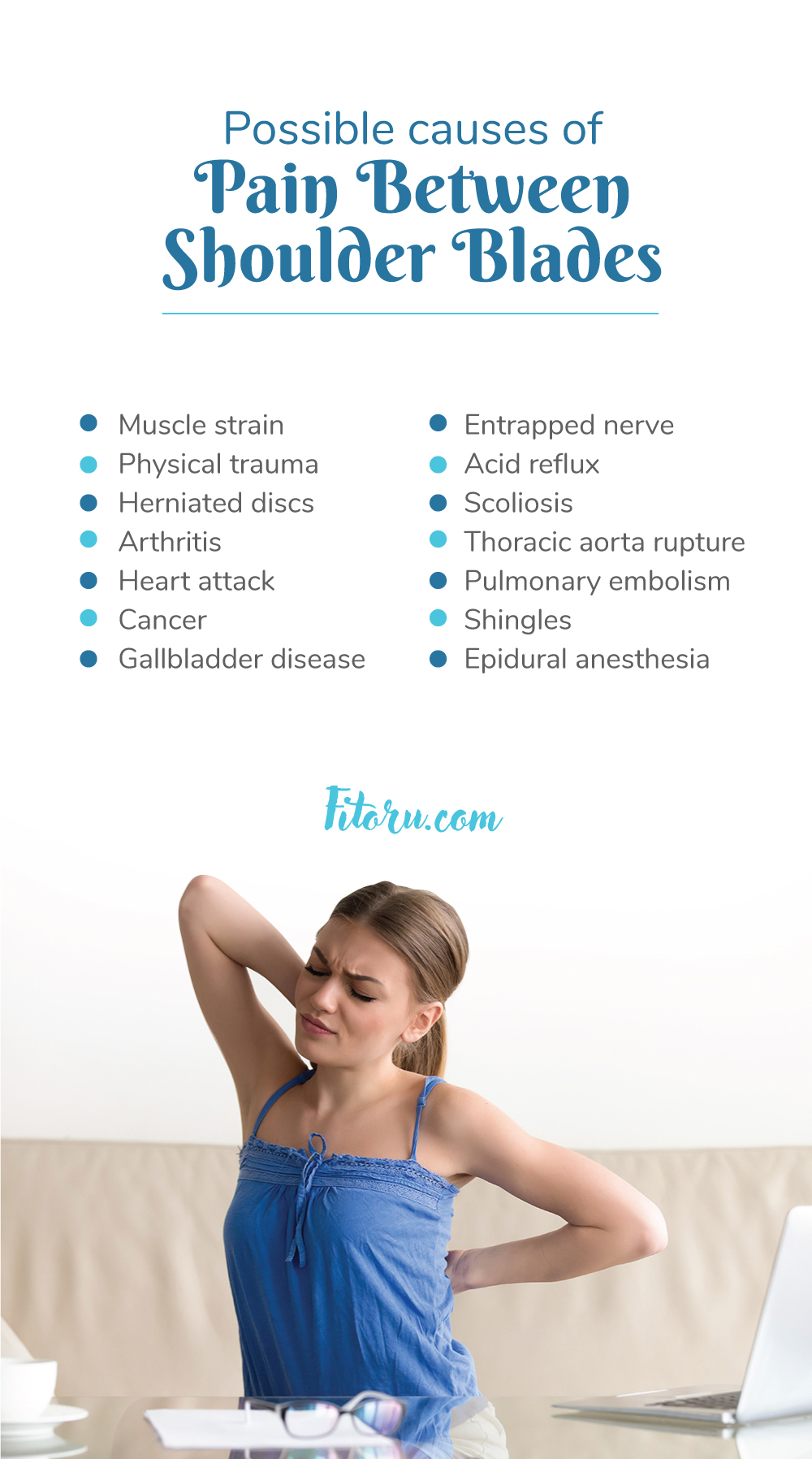 The most common cause of pain between shoulder blades is muscle strain, whether it’s from sleeping on an inadequate mattress, poor posture (the prolonged leaning forward, sitting, and standing so many of our jobs entail), excessive lifting, or twisting motions like those that occur during sports such as tennis or golf. This is also one of the mildest potential causes of pain on this list.

Physical trauma causes of this pain include injuries like rotator cuff tears, acromioclavicular joint separation (AC separation), a shoulder separation (an injury to the ligaments), or a shoulder dislocation, though that is more commonly felt in the shoulder joint itself rather than between the shoulder blades. While these are serious injuries and need medical care, they are not immediately life-threatening.

Herniated or bulging discs in either the cervical spine or thoracic spine can cause pain between shoulder blades. Those with degenerative disc disease in their neck often only feel pain in other regions of the body due to the interruption of nerve signals, which can result in delayed diagnosis of the underlying issue.

Other symptoms could include pain in one or both of your arms, numbness, or a tingling sensation in your extremities. If the disc disease is located in the neck, sometimes the pain responds to your flexing or extending the neck, improving or worsening as you move, an indicator that a herniated disc could be the culprit condition.

Arthritis occurring in the neck or possibly the ribs can manifest as pain between your shoulder blades. As with the above-mentioned disc disease, arthritis in the neck may cause pain in other regions of the body, including between the shoulder blades, even if there is no neck pain involved.

Heart attacks, and especially those that afflict women, do not always begin with chest pain. Sometimes the pain of a heart attack is exclusively confined to the region between the shoulder blades, and it’s a pain that should be taken seriously.

Heart attack symptoms may also include shortness of breath, lightheadedness, a strange sensation in the left arm, or chest pain. It’s important to familiarize ourselves with all the symptoms of a heart attack, especially as they differentiate between men and women experiencing heart attack and heart disease. The less is known about these distinctions, the more likely it becomes that women or those with vague symptoms will die because their symptoms are misinterpreted or not recognized as being traditionally associated with heart attack.

Lung cancer, and particularly Pancoast tumors, may create a symptom of pain between the shoulder blades by pushing against the nerves at the top of the lungs. Other cancers that may cause shoulder pain include mesothelioma, lymphomas, esophageal cancer, liver cancer, and breast cancer, sometimes without any other palpable symptoms.

A clear example of referred pain, gallbladder disease often manifests as a stabbing pain in between the shoulder blades, the upper right region of the abdomen, and/or nausea. Incidentally, this pain also commonly occurs after eating a fatty meal.

A pinched or entrapped nerve can cause pain between the shoulder blades, as in the example of myofascial pain syndrome, a chronic disorder in which pressure on sensitive trigger points in your muscles causes pain either in that muscle or in unrelated parts of the body.

Gastroesophageal reflux disease (GERD) can sometimes cause pain between the shoulder blades due to the location of the esophagus in this region. GERD can also include symptoms like difficulty swallowing, hoarseness, and chest pain. Untreated GERD is associated with increased pain and discomfort, as well as with eventual risk of developing esophageal cancer. Inflammation of the pancreas could also cause this same type of pain because it may irritate the bottom side of the diaphragm.

Scoliosis of the thoracic spine could cause pain in the area between the shoulder blades. While many people are already aware they have a curvature of their spine, others are not, and scoliosis could be revealed as the underlying condition resulting in this pain.

A thoracic aorta rupture or an aortic dissection (when a tear in the blood vessel wall allows blood to leak into the walls of the aorta) usually comes along with severe and rapid pain, and is a true medical emergency. It is said to feel like a sharp, sudden, tearing pain in the upper middle back.

A pulmonary embolism happens when blood clots in the legs (deep venous thrombosis or DVT) break off and travel through the bloodstream to the lungs. The onset of pain is often sharp and sudden, and may come with severe shortness of breath. Some people, however, report only noticing a mild discomfort, which is why pain in this region must be taken so seriously. Pulmonary embolisms are often preceded by blood clot symptoms like pain, redness, and swelling in the legs, and some risk factors for this condition include cancer, a prolonged plane or car ride, extended bed rest, pregnancy, or recent surgery.

Shingles is an inflammation of the nerve ganglia and is caused by the same virus as chickenpox. It can cause pain all over the body depending on which nerve roots are attacked, and often reveals itself as a skin eruption and rash around the body’s middle. The pain may originate in the area between the shoulder blades, or may concentrate on one or the other side of the body.

Women who have had an epidural during labor and delivery of a pregnancy might experience interscapular pain, which luckily abates relatively rapidly after the drip is slowed or the delivery is completed.

Some of the causes listed above are life-threatening and require immediate emergency care and attention. If the pain between your shoulder blades is sharp and sudden, if it comes with chest pain, lightheadedness, or shortness of breath, or if you have an indescribable “gut feeling” that something is very wrong, do not wait, and call for an ambulance or emergency help right away. Urgent medical care can help even the most severe of the conditions above resolve safely, but time is absolutely of the essence.

A Pain to Be Reckoned With

Due to the location of the region between your shoulder blades and the vital organs housed in your chest, pain in this area is very much a cause for concern. If you’re sure it’s just the way you slept, a muscle spasm perhaps, or if you’re soon pain free and feel fine, it may not be an emergency. However, if this pain is unusual or persistent or comes with any other worrying discomforts, it could literally be as serious as a heart attack.

There is a saying, “when in doubt, check it out,” and there’s an addition we’d like to make to that: if one doctor doesn’t recognize your symptoms as legitimate (as with so-called abnormal heart attack symptoms, especially in women), seek medical attention elsewhere. You know your own body, and pain is your body’s way of speaking to you. Listen carefully, and seek the care you need without hesitation

Cut Weight and Costs with These Free Fitness Ideas

How to Get Rid of Tonsil Stones with 5 Natural Rem... 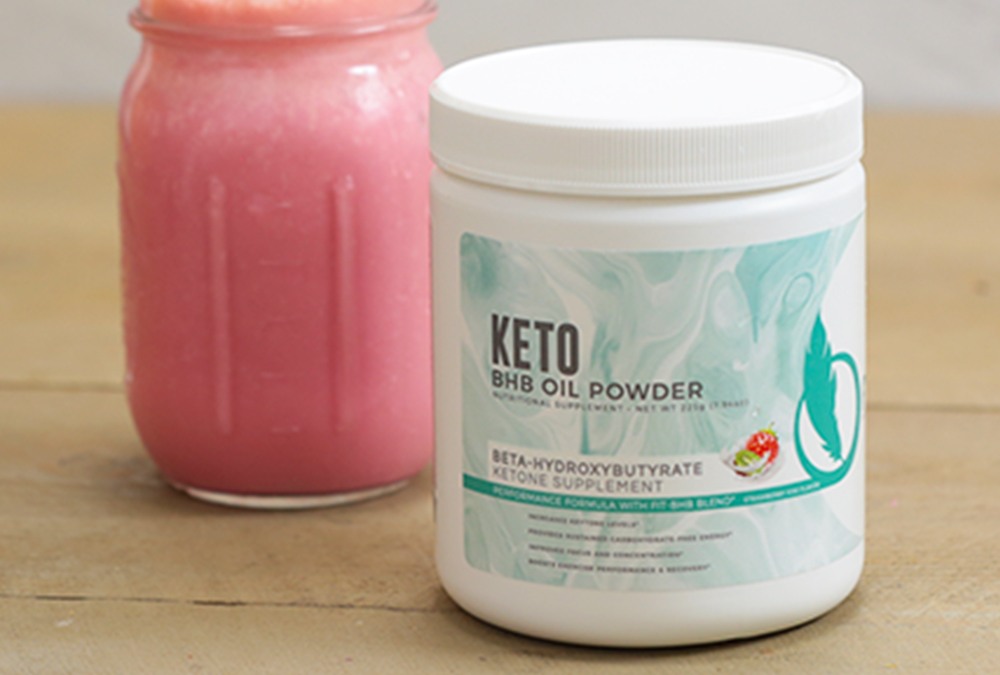 The Benefits of BHB Oil for Keto and Beyond

Whether you're starting a ketogenic diet or you're looking for a supp... 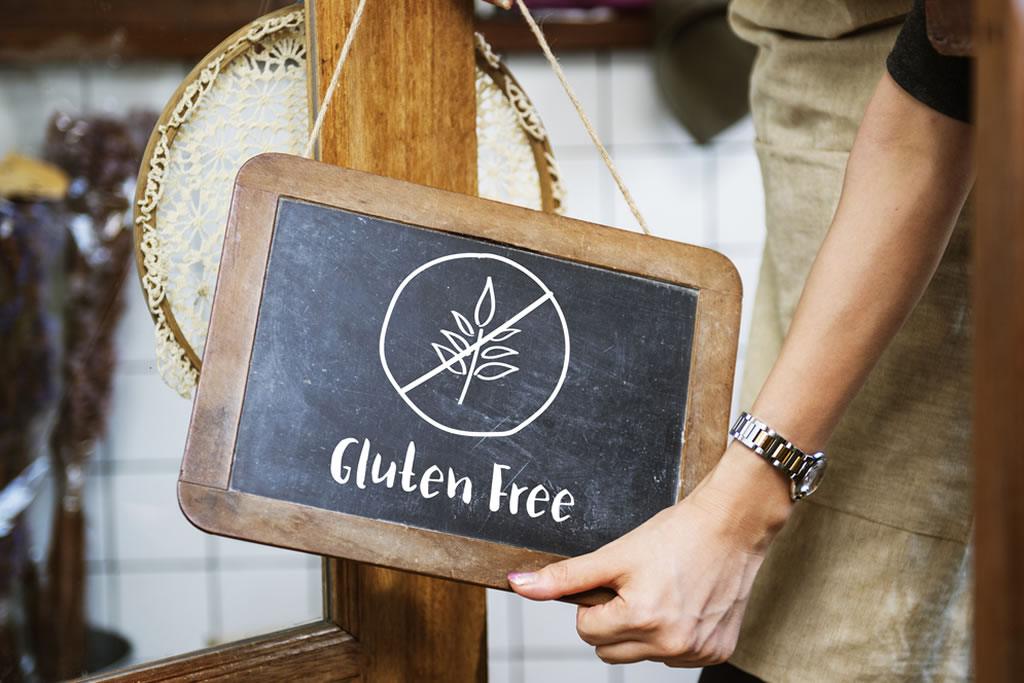 Over 1.6 million people in the United States adopted the gluten-free d... 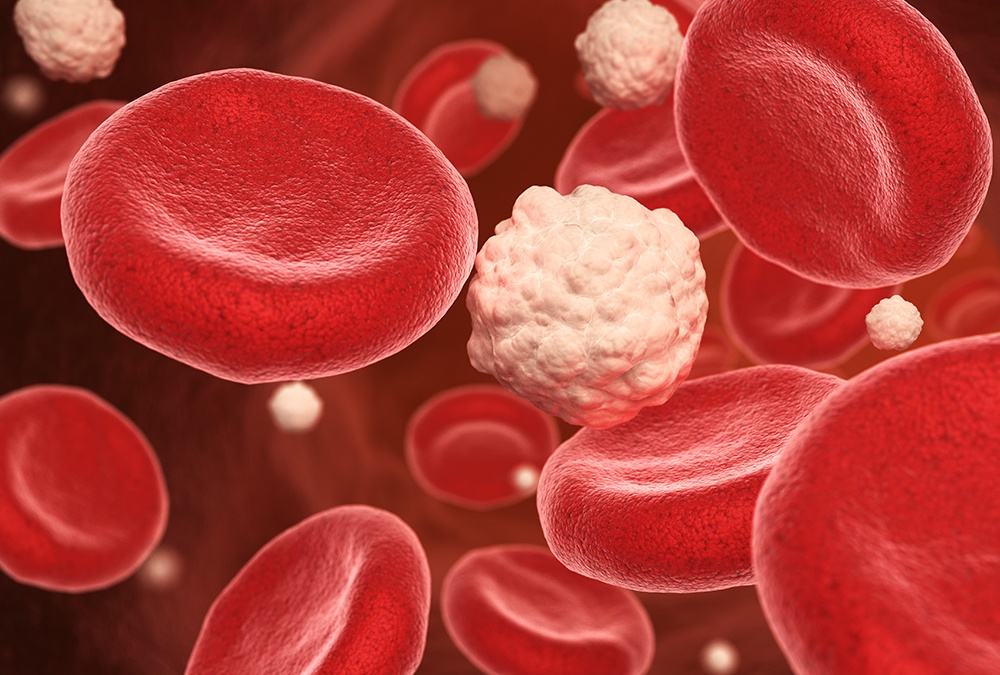 What Is Gluconeogenesis and What Does It Have to D...

It sounds like a new spin-off of the Matrix series, but gluconeogenes...